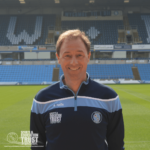 Simon Wears, Head of Health at Wycombe Wanderers SET tells us how their recent project has developed skills and confidence for young female refugees.

Tell us what what sparked the idea for this project?

Helping to build a more active, inclusive, healthy and well-integrated community is one of the key aims for Wycombe Wanderers SET. With a population of refugees and asylum seekers in Wycombe we were keen to support them to make an active start and and feel welcomed into the community. We met with staff and young people at the Wycombe Refugee Centre and discovered that there were no activity sessions for young female refugees, specifically those 12-24 years old. Skateboarding was identified as something they would like to try and wasn’t offered anywhere locally.

Education is also at the heart of WWSET’s work and so we included the opportunity to complete the FA Playmaker course and have mentoring sessions for any children over the age of 14 who attended. They could then use their new skills within the community across a number of existing projects we run.

How did you encourage participants to come along? 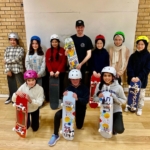 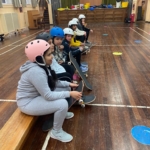 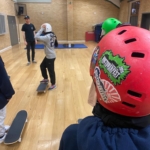 The early engagement with the Refugee Centre meant there was a natural promotion route with excitement and anticipation for the sessions to start. The funding enabled us to recruit a highly skilled instructor who led fun sessions which engaged the girls from the start.

The sessions attracted 14 participants over 13 weeks.

What were the important aspects of the project?

The funding for delivery provided a safe space for the children to access a qualified skateboard coach. Our nearest qualified coach commuted from Reading to deliver high quality sessions. The coach had the qualities to engage with the children and built a strong rapport over the course of the delivery.

We also made space for the young people to learn, make new friends and build their confidence.

Did you collaborate with any other organisation to promote or run your project? 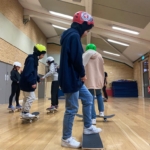 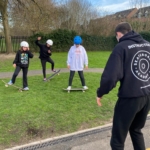 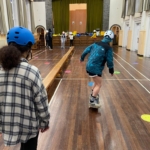 Yes, we were able to locate a coach from Skateboard Academy who were very positive and engaging throughout the sessions.

COVID meant that we had to move venues which was at times a little challenging but we were fortunate to engage with Millbrook school who were very supportive and a knock on effect of hosting the sessions there is that it has inspired the school to deliver 2 after school skateboard clubs.

Lawrence Lok (The FA) was also involved and mentored the children and their siblings (14+) who completed the FA Playmaker course. 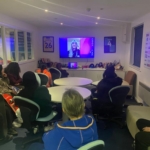 We were also fortunate to make contact with a local female volunteer who was in the process of completing the Skateboard GB course. She has been such a great positive female role model and inspiration to the participants each week.

Finally we engaged with Elle England from WavesPavesGals. Elle is based in Bristol and Cornwall where she has established a strong skateboarding female based community.

I know Elle from previous voluntary work at the Wave Project and knew that she would be an inspired female role model. Elle delivered an online Q&A with the girls for a one off session that went down really well.

Please tell us about the positive outcomes from the project 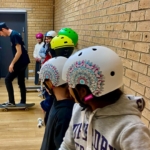 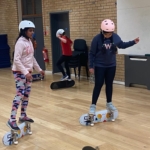 Over the course of the last 10 weeks we’ve watched the girls grow in confidence and ability. At the start only one participant had ever been on a skateboard before so this was a totally new experience for the majority of them and we have been so impressed by their positive attitude in wanting to have a go.

The coach has allowed time each week for the girls to celebrate each other’s achievements and if they wanted to, show their peers. Praise from the coach and other adults has allowed the children to really feel good about what they’ve achieved however small but week on week they are making considerable progress and are stretching themselves.

By being part of this group the girls have formed their own friendships (creating their own whatsApp group) and spend most of the sessions smiling. Parents have reported how the girls look forward to coming along.

One child who was painfully shy is now starting to shine. She now holds her head high and believes in herself. It’s an absolute joy to see her pushing off on the board.

Another success I consider is when a new asylum seeking family with a young girl arrived recently and heard about the skateboarding sessions, two days later she was part of the group and she was so happy.

Below are some comments from two participants:

We can do many tricks including a tic tac, tail stump and so much more. We can always talk to one another because we trust one another. We have formed a little community that supports each other. We are all friends and help each other. We’ve learnt so much and have grown in confidence and hope to carry on in the future. (Session participant)

We can do lots of new things since we started skateboarding, tic tac tail stumps, monster walk and we can also go up a ramp. We are part of the refugee partnership and know each other well and really happy together. We have improved so much since we started in January. (Session participant)

How did the funding help?

It’s given us the ability to be brave, creating a unique opportunity to support refugees in the local community. The sessions have supported physical, mental health and wellbeing and socially embedding participants in the community. Families of those engaged have also been offered opportunities for match day experiences and participants that completed the FA’s playmaker course are being mentored to develop to their full potential.

For more information on the Together Fund contact Wendy Couzin wcouzin@leapwithus.org.uk