Long Jump legend Greg Rutherford MBE returned to the athletics club where it all started for him to unveil a special plaque in his honour. 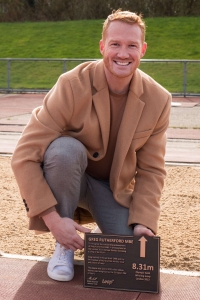 Rutherford, from Bletchley, became a household name when he won Gold on super Saturday at the London 2012 Olympics with a winning jump of 8m 31cm. His victory made him the fifth British athlete to hold Olympic, World, European and Commonwealth titles simultaneously, joining the ranks of Daley Thompson, Jonathan Edwards, Sally Gunnell and Linford Christie.

The journey for Rutherford began at Marshall Milton Keynes Athletic Club, taking his first leap into the club long jump pit around 1999. It is alongside this long jump pit that the plaque, celebrating Greg’s Gold medal winning jump at London 2012, has been unveiled. The plaque marks the jump of 8 metres 31 that won him the title and will provide inspiration for generations of athletes to come.

“It was wonderful to welcome Greg back to the club where he first started sprinting and Long Jumping, and where he has been a member throughout his athletics career. The plaque will serve as a permanent reminder of Greg’s historic achievements and prove inspiring for future athletes who train with the club.”

It is this passion for the power of physical activity and sport that has led Greg to become Patron of Leap. Celebrating our 20th anniversary this year, we’ve spent two decades working to improve the lives of residents across Milton Keynes and Buckinghamshire through physical activity and sport. Greg’s support through his Patronage gives us a huge boost to continue our work.

“I’ve found out first-hand the benefits of being involved in sport and activity but everyone doesn’t have to go on to become an Olympic Champion. Sport and activity enables you to stay fit, be around different people, learn new perspectives on life, build confidence and improve general well-being, So we need to encourage people to experience that for themselves.”

“I’m a huge advocate, especially with children, that we encourage them to get outside and enjoy their natural surroundings. I’m desperate to ensure my kids enjoy being active and being outdoors. Through clubs, sport, and being active there are so many social and important moral skills that you develop, that benefit you in wider life.”

“I’m looking forward to working with Leap to help their cause of improving the lives of local residents by encouraging people to get outside and active.”

Sue Imbriano, Chair of the Leap Board said,

“We are honoured and delighted that Greg Rutherford MBE has agreed to become the patron of Leap. As the lead organisation for promoting sport and physical activity across Milton Keynes and Buckinghamshire to have one of the most accomplished athletes in the world become our patron is a real honour.

“The obvious connection, not to mention the play on words, for Greg to become the figurehead of a sports body called Leap was too good an opportunity to miss, especially as it’s a leap year. As the social enterprise responsible for improving people’s lives through physical activity and sport, our values are very close to Greg’s and we look forward to a number of future collaborations with him.”

Watch this space for more information on Greg’s role as our Patron.