Legendary rally driver Paddy Hopkirk MBE was inducted into the Bucks and Milton Keynes Sporting Hall of Fame at a glittering awards night on Friday (Nov 22).
Paddy, 86, who lives in Penn, is famed for stunning the world of motorsport in 1964 by winning the Monte Carlo Rally in the now classic Mini Cooper S – a victory which helped make the Mini a 1960s’ icon. 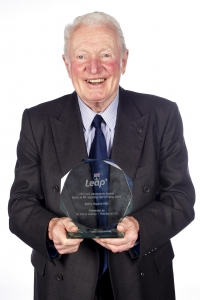 The crowd of nearly 300 people at Aylesbury’s Waterside Theatre, who were guests at the 14th annual Bucks & MK Sport Awards, cheered and clapped as he became just the fourth Hall of Fame inductee. He followed Olympic legends Sir Steve Redgrave CBE and Greg Rutherford MBE, and Paralympic hero Sophie Christiansen CBE.
The evening is organised to pay tribute to the people and organisations who make grass-roots sport and activity happen in the area, while also giving the special Hall of Fame tribute to the county’s elite-level athletes.
Paddy, whose wife Jenny Hopkirk is a former High Sheriff of Buckinghamshire, won numerous other races in his heyday and is still hugely involved with motorsports.
He is a global brand Ambassador for MINI, as well as Ambassador for the Institute of Advanced Motorists Road Smart – a leading road safety charity. Along with serving until recently as President of the British Racing Drivers’ Club, Paddy is a keen supporter of the Wheelpower charity based at Stoke Mandeville Stadium.
He was presented with the award on Friday by the Lord-Lieutenant for Buckinghamshire, Sir Henry Aubrey-Fletcher KCVO.
Afterwards, Paddy told of his delight at being inducted into the Hall of Fame alongside three sporting greats:

“I am terribly honoured and I didn’t expect it. To be associated with all these great people is wonderful – it’s terrific.” 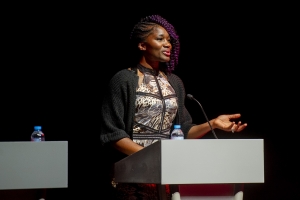 The audience was entertained by an inspirational speech from netball star Ama Agbeze MBE, who was captain of the Commonwealth Gold Medal-winning England team in 2018. The victory in Australia encouraged an estimated 130,000 people to take up netball in the UK last year.
She recognised the ‘amazing’ contribution of volunteers and teachers in the audience and said:

“My life has been a whirlwind in the last two years basically but I wouldn’t have been able to do without the volunteers and all the people who helped me along the way, and I don’t need to preach to you about how amazing it is that people like you exist.”

Sue Imbriano, Chair of Leap – the County Sport and Activity Partnership which co-ordinated the awards – told the nominees in her opening speech:

“This is your evening and we are delighted to be able to recognise your commitment and your dedication to making sport happen on the ground and providing inspiration and opportunities for your communities to participate whatever their level, their ability or disability.” 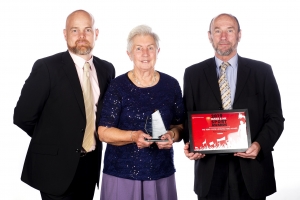 Over the more than 40 years that Terry has been involved with High Wycombe Rugby Club, she has played an important part in helping its development.
In the early years, with her late husband George, she first helped develop the youth section and later the Colts XV and also with him, the running of the bar and for a while, presided over the club kitchen regularly feeding over 200 people on a Saturday.
More recently, as a club committee member and Fixture Secretary for over 20 years, she has helped keep senior teams playing and when the main season is over, for the last ten years she has organised the summer touch rugby league and also, has been heavily involved in the club Boxing Day festivities including running a tombola and playing the organ for the traditional post- match carols.
Terry is the first to volunteer and always with a smile on her face.
Terry said after winning her award:

“I am extremely thrilled and very, very proud and I hope I have justified it for the sake of High Wycombe Rugby Club, I have had a thoroughly enjoyable time whilst I have been volunteering.”

SECONDARY SCHOOL OF THE YEAR (Sponsored by World Challenge)
Winner: The Buckingham School 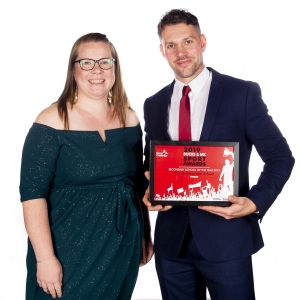 The whole school ethos to physical activity is reflected in the ‘Active Tutorials’ programme. Students no longer sit for 35 minutes at the beginning of each day, but supported by their tutors, get moving with activities including archery, yoga and the morning mile.
The ‘Sports Fortnight’ engages the whole school about the benefits of sport and this year had a theme of resilience.
Teachers from across subject areas also used sport and activity in their lessons for example in Science students learnt about velocity through sprinting and archery.
Leigh Churchward, the Curriculum Leader of Physical Education and Director of Specialism, said:

“It is amazing. We came runner-up a year ago and obviously were completely gutted by that. But this is a dream come true – we’ve actually made it to the pinnacle of Bucks and MK Sport. All the hard work myself and my team put in has paid off with some excellent recognition.” 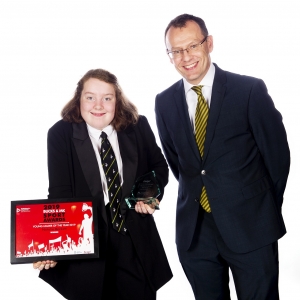 Natalie has an infectious enthusiasm for Rugby and assists coaching sessions at both Great Marlow School and High Wycombe Rugby Club.
She has completed the England Rugby Referee Award and is now a fully-qualified match official. Natalie is putting her new-found skills into practice and refereed matches between adult teams at the club’s Touch Rugby Tournament.
Natalie’s determination and enthusiasm rubs off on her peers and she is well respected in her club and school communities because of these traits.
Natalie, 15, who is in Year 11 at Great Marlow School, said:

“I didn’t think I was going to get the award. I am really excited.”

“She is amazing – she doesn’t think she is but she is inspirational.” 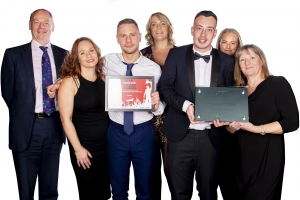 Staff at Bedgrove Junior School work to ensure that as many children as possible represent the school in sport, at all levels.
Activity is embedded in the school day from mile-a-day to using the new performing arts studio for dance. And the school encourages pupils to be active at home with family resources like Change for Life and Fitter Futures.
Resurfacing the year 3 playground and installing new equipment has encouraged more active playtimes, with behaviour incidents on that playground reducing by 50% as a result.
Lorraine Greco, headteacher, said:

“This award is an amazing achievement and recognition of our commitment to school sport. When I started at the school four years ago, sport was not a curriculum priority and extra curricular activities were virtually non-existent.  I am so pleased for our sports team who deliver a fantastic PE and school sports curriculum to all of our children everyday.”

PROJECT OF THE YEAR (Sponsored by Buckinghamshire County Council)
Winner: ‘Snap To It’ 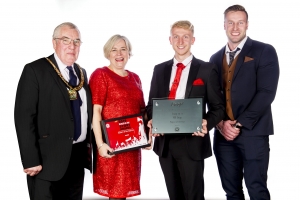 The goal of ‘Snap to It!’ is to provide sport and activity opportunities to disabled people and encourage those who wouldn’t usually take part, to give it a try.
The project offered a choice of eight physical activities a week from nature walks to football, horse-riding to yoga and welcomed over 100 participants to these sessions.
Results show the sessions improved the physical, mental and emotional well-being of people with learning disabilities and developed their confidence to access activities in the community.
The project, which has been going for just over a year, is run by the MK Snap charity, based in Milton Keynes. Snap stands for Special Needs Advancement Project.
Angie Novell, the Chief Executive Officer, said it was the first award MK Snap had won in 27 years.

“We are just absolutely thrilled. This is recognition of a really important project because the health and well-being of the people we serve is absolutely at the heart of what we do.”

IMPACT OF THE YEAR (Sponsored by My Milton Keynes)
Winner: Better 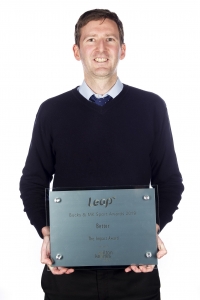 A nationwide social enterprise, Better operates facilities within Chiltern and South Bucks.
Through its community outreach programme, Better has worked with partners to engage residents who may have difficulty in accessing its facilities.
These include delivering disability sessions with Nclude and Macintyre, youth programmes with Aspire’s pupil referral units and gentle exercise with care homes.
Better gathers insight from local residents through focus groups, using this to inform delivery. It also employs a robust evaluation framework that ensures it keeps the service in line with local demand and trends.
Leon Popplewell, Community Sports Manager, said: 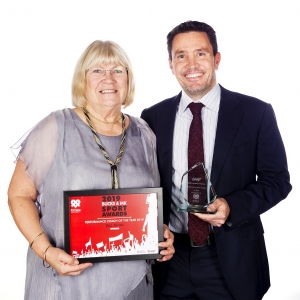 You’ll find Zak coaching Hockey at Buckingham Hockey Club; this small town club exceeds expectations and competes with larger clubs who have greater resources.
Last year, Buckingham Women’s Hockey club finished 4th in the National League and 2nd in the National Women’s Indoor Championships.
Zak has coached many of the squad to represent their home country or the GB Squad for their age group.
His ethos of developing players is infectious and the elite players he has coached often visit local schools to show their medals and inspire the pupils.
Zak said:

“I am delighted and humbled when you look at all the other awards and see what good work they are doing. I am incredibly proud to be a very small part of the coaching landscape.” 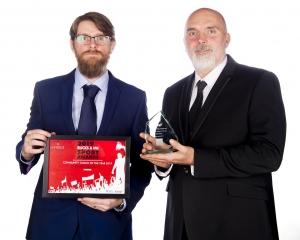 David’s coaching philosophy at Radnage Raiders Football Club is one of encouragement, enthusiasm and fair play.
Setting the club up in 2016, David has worked hard to engage additional coaches to ensure there is a local based club for children living in the village. The children are encouraged to be the best they can be and play as a team and as part of their community.
David also volunteers with a large local club to assist players experiencing mental health helping them to gain confidence and increase both their physical and mental health.
David said:

“It’s lovely to be nominated. To actually win it is ‘oh my gosh’. This is the stuff that on a rainy, horrible freezing cold morning gets you out of bed – the recognition.” 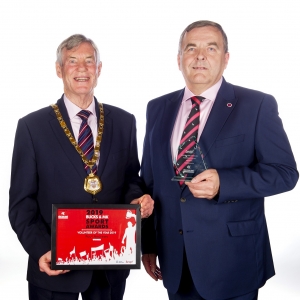 As youth chairman at Aylesbury Rugby Club, Paul ensures 20 teams of young players can get their Rugby fix each week.
Paul manages the fixtures, car parking, pitches, changing rooms, the kitchen, officials and kit for the teams.
He has also recruited a number of under 15s to complete their Young Match Officials training developing both the players and officials of tomorrow.
Most importantly of all, Paul ensures that every child who comes to the club has the best experience they can and leaves with a smile on their face.
Paul said of his award:

“It’s amazing. I am shocked. The reason I do this is my son (William) plays rugby and I do it because I wanted to give something back to the community.”

GROUP OF THE YEAR (Sponsored by Evolve)
Winner:Redway Runners 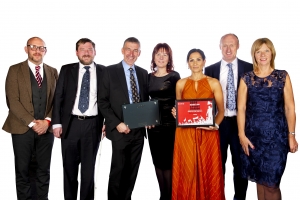 Formed just eight years ago, the Milton Keynes based Redway Runners club has rapidly grown and now has a programme of around 50 runs each week.
The club offers something to suit all abilities from complete beginners to seasoned marathon runners.
With a strong commitment to the local community, members frequently support events from village carnivals and litter picking to linking with the local GP surgery and business community.
The club also aims to support runners with disabilities and several members are trained as guides for visually-impaired runners.
Annette Smyth, Run Leader and Coach, said of the award:

“It is a real honour. It is just a bit of a shock because I saw who the other entrants were and they were so worthy. This is the biggest award we have won.”