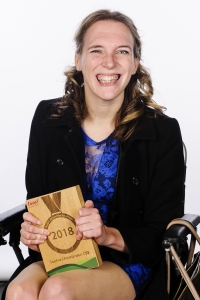 Sophie Christiansen CBE with her Hall of Fame award

The evening is organised to pay tribute to the people and organisations who make grass-roots sport happen in the area, while also giving the special Hall of Fame tribute to the county’s elite-level athletes.

She was presented with the award on Thursday by the Lord-Lieutenant for Buckinghamshire, Sir Henry Aubrey-Fletcher.

Afterwards, she told of her delight at the accolade which puts her in the same league as the likes of Sir Steve Redgrave and Greg Rutherford.  She said:

“Being inducted into the hall of fame is an amazing honour. To be in the same league as all those talented athletes and being the first female para athlete opens the door to all the diversity coming through.”

The audience was entertained by a speech from Aaron Phipps, a Great Britain Wheelchair Rugby athlete and Paralympian. At 15, Aaron had both of his legs and most of his fingers amputated due to blood poisoning from meningitis. 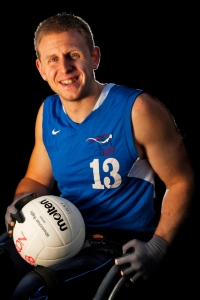 He now works across the UK with young people to help them achieve their goals and is a Sky Sports, Living for Sport, Athlete Mentor.

He told the captivated audience how, in 2016, he become the first disabled British person to scale Mount Kilimanjaro without assistance, climbing on his hands and knees through large parts of the ascent. He praised the award winners, describing them as ‘amazing’ and adding, “It’s an honour and privilege to be here this evening.”

“These awards are second to none. I haven’t been to another sports awards ceremony like this – the venue, the atmosphere and the people are fantastic.”

Group of the year 2018 (Sponsored by My Milton Keynes) 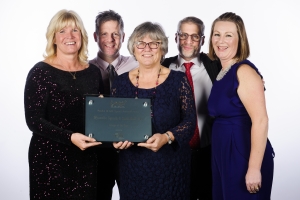 Working hard with a variety of community partners, the junior section has recently doubled and now provides 90 young people the opportunity to play squash. Overall membership numbers are nearing 350 and female participation is up 30%

Despite high membership numbers, a team of 20 volunteers ensures the club remains welcoming and inclusive for all.

Wycombe Squash and Racketball Club is dedicated to developing each individual member, not just developing the sport. Through new and existing partnerships in the area, the club is upgrading the facilities and ensuring all coaches and volunteers are trained to the highest standard to support its members.

Marian Holmes, Chairman, said she was ‘absolutely over the moon’, adding:

“I am really delighted for the whole club. It really says a lot for all the volunteers and all the members. There’s an element of [it being that] squash doesn’t expect to be recognised in this way, so it’s really very nice and much appreciated.”

Melanie, who lives Aylesbury, delivers weekly sessions for children and adults with disabilities in both martial arts and football. She coaches at Stoke Mandeville Stadium and Princes Risborough as well as some schools. Delivering inclusive sessions through the Ikkaido martial arts charity, Melanie coaches in community and educational settings. 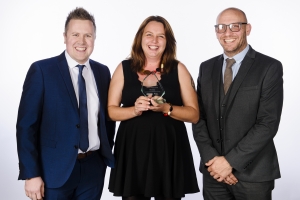 Her drive to develop means that Melanie is constantly learning and has attended multiple workshops covering topics including behaviour change, transferable games and nutrition.

Melanie’s personal experience of disability and the power of sport mean that she is driven to show that activity can be inclusive and accessible to all.

She said, of winning the award:

Performance Coach of the Year 2018 (Sponsored by PJ Care Ltd. Specialist Neurological Care)
Kevin Brooks
Head coach at Wycombe District Swimming club, Kevin oversees the development of over 600 swimmers, 60 of which are in the performance squads.

Kevin lives and breathes swimming and this year took 47 swimmers to the British Summer Championships, coaching the squad to win 30 medals over the summer season. 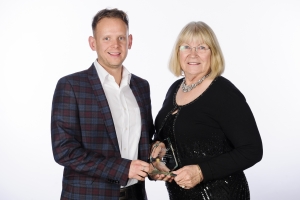 He also coaches for British swimming and took the British Girls Team to the European Junior Championships.

Kevin has transformed the club in recent years and this year the club, in partnership with Bucks New University has been selected to become one of 5 national swimming performance centres.

A superb coach, Kevin is able to understand the support needed by his swimmers to achieve the best they can. Kevin, who lives in Aylesbury and works in High Wycombe, said:

“I am very happy. It’s an award for my whole team, all the volunteers and the committee that help to make the club what it is. It’s not just me – it’s all of the team. We go by the hashtag one team because we are one team. We are very inclusive.” 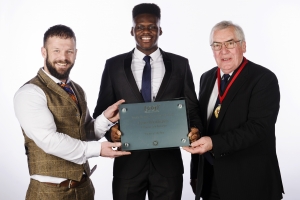 Under the leadership of a cancer rehabilitation specialist, the sessions are part of a 12-week course for those who are being treated, or in remission for breast, prostate and bowel cancer.

In an inclusive environment, each individual completes a training plan tailored to their specific needs.

These courses have helped participants to overcome isolation, depression and loneliness at a time which is so crucial in their lives.

Jerome Carey, Personal Trainer who runs the classes, was delighted to win, especially since the sessions only began in May. He said:

“I feel very, very pleased and ecstatic. We were not expecting it.”
Primary School of the Year 2018 (Sponsored by Bucks New University)
Swanbourne Church of England School

The school has worked hard to have a more active curriculum, with teachers planning active lessons to ensure pupils are up and moving throughout the day. 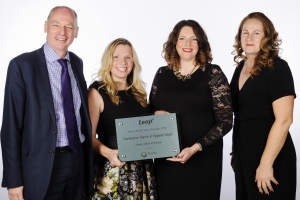 The school has also implemented a number of Change 4 Life clubs to engage inactive students, building their confidence and encouraging them to find enjoyment from being active.

With a comprehensive training programme, staff are encouraged to return to school and share their learning.

Building on the Gold School Games mark achieved last year, they now have record numbers of pupils both participating and leading sport and activity.

“We are incredibly excited and utterly delighted. It’s the culmination of five years of hard work by all the staff and pupils.”

Secondary School of the Year 2018 (Sponsored by The University of Buckingham, Leaders in Entrepreneurship)
Denbigh School

A wide range of activities are offered at Denbigh School and chosen to suit the students’ needs and abilities. Over 200 fixtures provide plenty of opportunity for competitive sport and extra-curricular clubs are on offer before, during and after the school day. 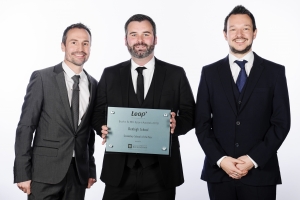 Secondary School of the year, Denbigh School with Simon Watts from category sponsors The University of Buckingham, Leaders in Entrepreneurship

The School Council plays an active role in shaping PE and this year helped redesign the school PE kit, taking on board pupil feedback. This has led to improved engagement and participation, particularly among female students.

Denbigh has developed a sports performance programme to provide talented students with support including talks from professional athletes and advice on how to balance academic study with training demands.

Offering both academic and vocational routes, students wishing to pursue PE and sport through education have a variety of opportunities. Pupil leadership is also encouraged and facilitated.

“We are absolutely delighted to pick up an award like this. It’s fantastic.”

Young Leader of the Year 2018 (Sponsored by Buckinghamshire College Group)
Isabella Parola
Isabella has made an outstanding contribution to sport both at John Colet school and to community rugby in Buckinghamshire. She helps at weekly school rugby sessions at Aylesbury Rugby club and has encouraged over 230 pupils to be active in her school as part of the Girls Active programme.

An integral part of the delivery of primary school festivals, Isabella has helped enable over 130 primary aged children to experience competitive sport. 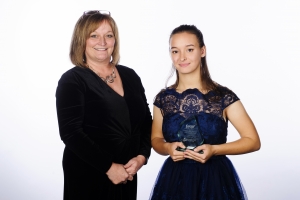 Her leadership, communication and organisational skills have developed and since becoming a young leader so has her confidence.

Isabella is an outstanding role model to a wide variety of younger students as well as to her peers.

Isabella, 17, who lives near Great Missenden, took to the stage on crutches following an operation earlier in the week to fix a ruptured anterior cruciate ligament in her left leg.

She said of her award:

“I am ecstatic – it’s brilliant. Honestly, I wasn’t expecting it. I love volunteering, and it’s great to know that all the coaching I have done has resulted in a lot of girls playing rugby.”

Volunteer of the Year 2018 (Sponsored by MK Council)
Sarah Prior
As a parent of three hockey players at Wycombe Hockey Club, Sarah’s parental support extends far beyond the side-lines after volunteering to sit on the club committee. 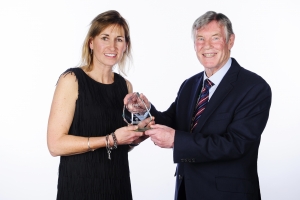 Despite not having sat in a role like this before, Sarah has worked to bring in high level coaches, engage parents, secure new volunteers and build relationships within the local community.

Highly efficient, Sarah has led the club to its most organised season yet, relieving pressure on coaches and other volunteers to enable the club to plan for the future, rather than being consumed by the day to day running of the club.

“I am absolutely delighted. It was completely unexpected. I knew I was nominated, but you don’t volunteer to win these things. It’s lovely to be recognised.”

Unsung Hero of the Year 2018 (Sponsored by More Leisure at Stoke Mandeville Stadium)
Denise Knibbs
As well as being a PE teacher at Alfriston School for many years, Denise founded the South Bucks Special Schools Association which provides young people with special educational needs the opportunity to participate in a number of sporting festivals and competitions. 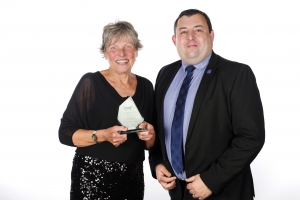 Denise has used her knowledge and experience to offer inclusive and enjoyable activities for thousands of young people and has created an incredible legacy over the past 30 years.

Denise is selfless, always putting others first, ensuring that young people with a disability have a positive experience of PE and school sport.

“I was very surprised to win. You just do what you do – it’s not to gain an award. You do it because you want people to experience sport. It gives children confidence and they learn a lot about themselves through sport. I work particularly with disabled children of all levels. Sport is very important in their lives.”

Click here to view photographs from the night in our online album.

If you know a local community sport hero who deserves thanks and recognition, please nominate them for next year’s awards. Check back in May 2019 when nominations will open.